Before I begin this post proper, I feel I need to point out that “Coke” is the most common abbreviation in the UK used for Coca-Cola.  As far as I understand most other countries (including English speaking ones) tend to say “Cola”.  But Cola can mean one of several brands of a similar drink (including supermarket own brands).  I think that’s why people, in England at least, still use the word “Coke” for Coca-Cola.  Now, to what I wanted to share…

It seems in this day of easy access to so much information (both true and false) people still blithely believe and spread “urban myths”, and it is around this time of year when one about Santa Claus and Coca-Cola still seems to get mentioned.  This year, within less than a week, I heard it from two groups of people.

The claim is that Santa Claus was not dressed in red and white until Coca-Cola used him in their adverts, changing his look forever.

This is simply not true.  Coca-Cola’s adverts with Santa Claus began in the 1930s, but Santa had been dressed in red with white fur for nearly a hundred years before that, or longer.  In fact, we can see that this had been the case since his creation by Washington Irving and Clement Clark Moore.

I say they “created” him.  That is, Washington Irving basically attributed to Saint Nicolas many of the mythical aspects that Santa Claus is known for today: you know, the bit about him flying through the sky to deliver presents to (good) children:

“And the sage Oloffe dreamed a dream – and, lo! the good St. Nicholas came riding over the tops of the trees, in that self-same wagon wherein he brings his yearly presents to children.  … And when St. Nicholas had smoked his pipe he twisted it in his hatband, and laying his finger beside his nose, gave the astonished Van Kortlandt a very significant look, then mounting his wagon, he returned over the treetops and disappeared.”
Washington Irving, “Knickerbocker’s History of New York”, Book I, Chapter V.   1809.

“The good old Dutch festivals … were faithfully observed in the mansion of Governor Stuyvesant.  … nor was the day of St. Nicholas suffered to pass by without making presents, hanging stockings in the chimney, and complying with all its other ceremonies.”
Washington Irving, “Knickerbocker’s History of New York”, Book VII, Chapter XII.

It all started as a joke that was not supposed to be taken seriously!

Clement Clark Moore then changed the night on which St Nicolas (Santa Claus) delivered presents from St Nicolas’s Eve (December 5th) to Christmas Eve (December 24th), and there he has stayed for most of us.  (Though I believe that in several countries in Europe, St Nicolas’s day is still celebrated, and children put out boots, or little shoes, or clogs on the evening before, to be filled with sweets).

‘Twas the night before Christmas, when all thro’ the house,
Not a creature was stirring, not even a mouse;
The stockings were hung by the chimney with care,
In hopes that St. Nicholas soon would be there;
…
Down the chimney St. Nicholas came with a bound:
He was dress’d all in fur, from his head to his foot,
And his clothes were all tarnish’d with ashes and soot;
A bundle of toys was flung on his back,
And he look’d like a peddler just opening his pack:
His eyes – how they twinkled! his dimples how merry,
His cheeks were like roses, his nose like a cherry;
His droll little mouth was drawn up like a bow,
And the beard of his chin was as white as the snow;
…
He had a broad face, and a little round belly
That shook when he laugh’d, like a bowl full of jelly:
He was chubby and plump, a right jolly old elf,
…
And laying his finger aside of his nose
And giving a nod, up the chimney he rose.
…
But I heard him exclaim, ere he drove out of sight-
Happy Christmas to all, and to all a good night.
Clement Clarke Moore, “A Visit From St. Nicholas”.  1823

Another claim doing the rounds about Santa Claus is that he is basically a modern day “Odin”.  Again, this plainly is not true.  Although started as a joke, Santa Claus is grounded firmly in the story of “St Nicolas”.

St Nicolas was a bishop.  Bishops wore red cloaks.  So, when the New York historical society commissioned their first painting of Santa Claus, naturally he was painted wearing red.

Here is a timeline of events up to Coca-Cola’s first use of Santa Claus:

1823 Clement Clarke Moore anonymously published a poem “A Visit from St Nicolas“, better known by its first line, “‘Twas the Night Before Christmas“, changing the date that St Nicolas delivers presents from December 5th to December 24th.  He also gave quite a few of the characteristics to Santa Claus’ form, which would be used in pictures and stories of him to this day. 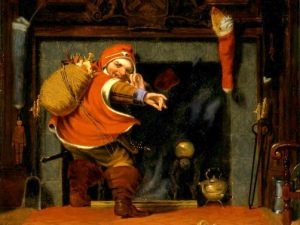 In 1863 Thomas Nast began illustrations of Santa Claus for Harper’s Weekly.  Most of these are in black and white, so it is difficult to say what colour he would have worn to start with.

However, in 1881 Thomas Nast’s possibly most well-known colour drawing, Santa is wearing red.  This picture is thought to be largely civil war propaganda (Santa Claus was on the side of the Americans), but there is no doubt that he has taken inspiration from the previous artists and writers, in particular Clement Clark Moore.  Thomas Nast is also often referred to as “the man who invented Santa Claus“, so in the scheme of things, this is yet more proof that it was not Coca-Cola who turned him red! 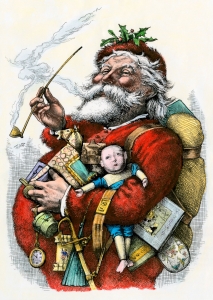 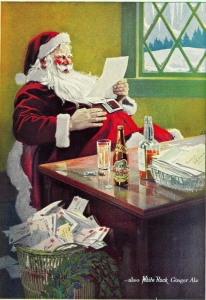 1931 Coca-Cola first used Santa Claus in their Christmas adverts.  They themselves claim that did “play a big role in shaping the jolly character we know today” – from the White Rock adverts I would dispute that, though maybe they made it world famous.  The point is, as we have seen, they did not change him much, nor deliberately dress him in red (see Did Coca-Cola create Santa Claus?); the artwork was very much based on what came before. 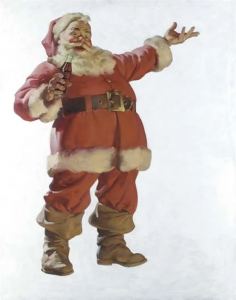 So why did this rumour about Coca-Cola changing Santa Claus into red even come about?  Well, here I can only conjecture:

Santa Claus came from the United States to the UK around the 1850s, being well established by the 1880s.  Prior to his arrival it seems that people didn’t tend to give (many) presents on Christmas Day.  Presents were given on New Year’s Day.  However, one character Britain already had was “Father Christmas“.  Britons are (or were – maybe not so much these days) prone to “personify” things.  So we have “Father Time”, “Mother Nature”, “Jack Frost”, and so on (if you can think of any others).  (Yes, the United States sometimes continued this habit, with Uncle Sam, for example).

“Father Christmas” was probably very similar to Father Time: an old man with a long grey or white beard, but who had no association with St Nicolas.  The “spirits of Christmas” in Charles Dickens’ novel “A Christmas Carol” were probably very much based on this idea.  His novel was written in 1843, so, as mentioned above, “Santa Claus” had not reached England yet, and St Nicolas was still very much associated with St Nicolas’s Day, not  with Christmas Day!

Father Christmas was never based on a real person, let alone a bishop.  So people could paint him any way they pleased.  And they did.  Generally, he was always an old man with a beard, but in terms of clothes, you can find illustrations of him wearing green, blue, purple, brown – I’ve even found one of him wearing leather!  But when Santa Claus was imported to England from the States, the two characters got blended into one, and so the standardised red St Nicolas gradually took over.

Today, people refer to Santa Claus as Father Christmas (and, dare I say, vice versa).  Thus we find paintings of “Santa Claus” type figures, that were actually Father Christmas figures, and of course, blending as they did, they were even sometimes labelled as St Nicolas!

So I believe that some folks, who did not understand this history, came across a picture of a figure that they perceived as “Santa Claus”, or maybe even labelled as such, perhaps in green (for example), and then saw the Coca-Cola advert with him in red, put two and two together and came up with an urban myth that is still being spread today.

For most of these tales you do not need to do anywhere near as much digging as I have done to find the truth.  There are other pages online that explain this as untrue, such as Snopes, and The Ferret.  For an excellent history of Santa Claus, covering more than I have mentioned, I can recommend A Christmas Cornucopia, by Mark Forsyth, ISBN 978-0-241-26773-8.

All pictures are believed to be in the public domain and/or are used under the Fair Use principle.

This site uses Akismet to reduce spam. Learn how your comment data is processed.